By Michael Rosenblat
Published on Jul 1, 2017

As an homage to Burton G. Malkiel’s “A Random Walk Down Wall Street,” I’d like to explore the price movements of bitcoin and examine the prospect of technical analysis and predicting trends.

Have you ever looked at a price chart for stocks, or bitcoin, or whatever, and felt that you could tell the future? Humans are fantastic at recognizing patterns, and this innate ability often opens us up to something psychologists call “conditioning.” The classic example of this behavior is Pavlov’s Dogs: Ivan Pavlov conducted an experiment, where he rang a bell every time he fed his dogs. Eventually, simply hearing the bell was enough to cause the dogs’ mouths to water in anticipation, even if there was no food in front of them.

We humans are subject to conditioning throughout our lives. A police car nearby causes you to drive more cautiously, the smell of coffee makes us more alert, and a single notification sound is enough to gnaw at you until you can finally look at your phone. But sometimes we form connections that don’t actually exist. For example, how often have you heard someone say they know a surefire cure for hiccups? Their belief most likely stems from the first time they tried that particular remedy and their hiccups happened to go away. It was most likely a coincidence, but they believed the remedy did the trick, and every time they used that remedy their hiccups did go away. But of course hiccups stopping at some point is perfectly natural, no matter what you try, and there is still no good scientific data on what causes hiccups to start or stop.

Conditioning can also be unlearned through a process known as “extinction.” When Pavlov stopped bringing food after ringing the bell, his dogs eventually stopped reacting to it. But some connections are very difficult to undo, which brings us to the main topic of this post: finding patterns in price charts that aren’t really there.

Take a look at the following three charts. They have no titles nor scales, and show only the relative price movement through time. See if you can pick out any patterns that you could have traded on. 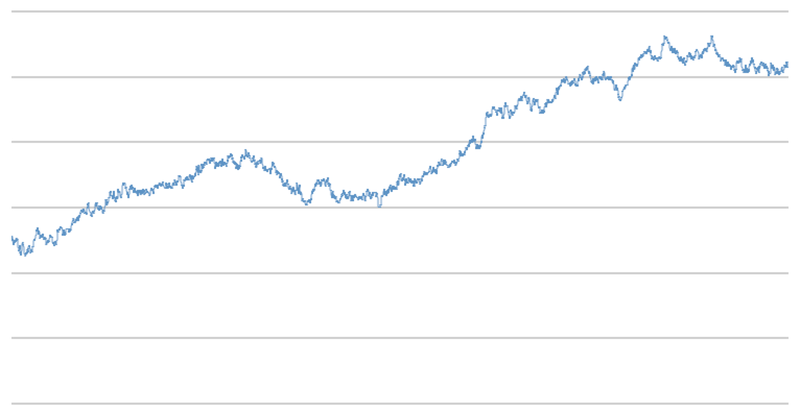 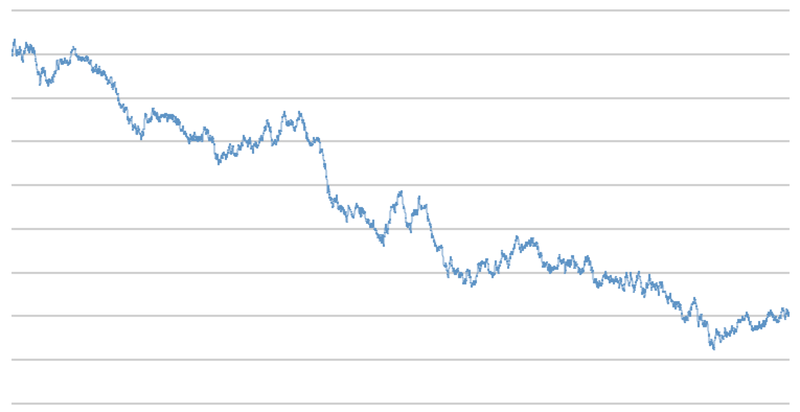 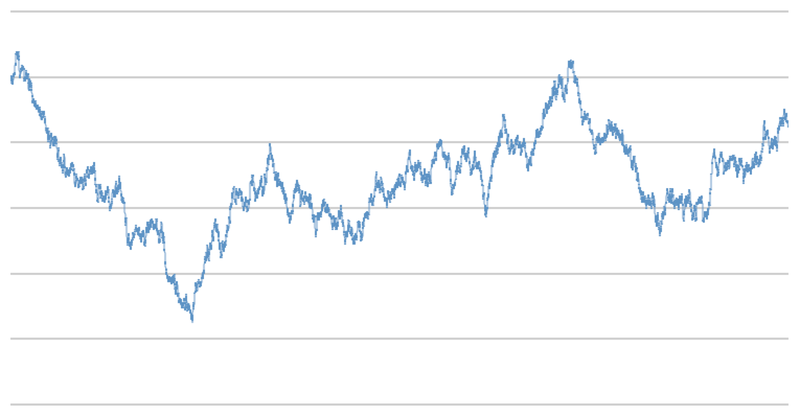 You would probably say Chart 1 shows an overall bull trend, Chart 2 has a bear trend, and Chart 3 is volatile. These charts do look just like price charts for the above trends, but the reality is that all three charts were generated using the same algorithm: Every day for 10,000 days, the asset moves a random amount between -1 and 1. What you are looking at is essentially 10,000 coin tosses.

And yet, even knowing the data is random, we can’t help but connect the dots and find patterns and trends amongst the noise. Does the stock market react to news and events? Yes. Does bitcoin? Yes. Is it easy to discern between a "genuine" price movement and a random one? Nope.

The "coin flips" in bitcoin are individual people, trading on their knowledge, hopes, and fears. Even though any particular trade is non-random, when you aggregate the behavior of all players in the market you end up with a high degree of unpredictability.

This means more often than not, the question “Why did bitcoin just go up 5%?” can be answered with a simple and definitive “No reason, because it’s random!” Sometimes a true trend can emerge, typically on longer time frames such as months or years, but in the short term, most trends are actually quite random in their causes.

Randomness may make us a little uncomfortable, since it’s so unpredictable. But the good news is that forecasting bitcoin prices is just as impossible for you as it is for somebody else. It’s also a warning for people who intend to day trade crypto-assets, because technical analysis—the half-art, half-science of spotting trends and patterns in prices—is going to be wrong about 50% of the time. The best traders out there, and they do exist, might be able to establish an edge of 5%, meaning that they are right 55% of the time and wrong 45% of the time. Almost half of their trades lose money!

But good traders think in terms of probability. Being right 55% of the time, over time, can result in great profits given an established trading strategy and proper risk mitigation. Good traders are similar to casinos, patiently relying on probability and letting the wins and losses average out in their favor.

So let this be a warning to anybody who thinks that technical analysis is an easy or guaranteed way to make money. In reality, most traders fail because of basic psychology: an inability to ignore connections that don’t exist, and the emotional rollercoaster that results in excessive risk taking. Never invest more than you can afford to lose, and do your homework when investing in bitcoin!

In parting, here’s a chart of bitcoin’s price over the last 2 years. See any patterns?